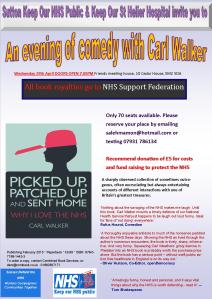 I was out driving in south Manchester yesterday, when I saw some notice-boards that caught my eye for having letters deliberately missing from them. At first I did not recognise the boards’ meaning, as I was trying to concentrate on driving, and the missing letters were not helping. But I then had to stop at some traffic lights, and so I took the opportunity to have a closer look. The first one read, roughly; –

There was an ‘NHS’ logo in the top-right corner.

The second board read, roughly; –

And there was the logo again.

Now call me ‘Old Mr. Paranoid’, but somehow that logo did not convince me completely that the National Health Service itself was where this sentiment originated. There is no doubt whatever that Accident & Emergency services are in a…

Confronting Imperialism and for peace and justice